“We are excited by the results from the initial testing phase for the Grata Prospect and the improved and simplified metallurgy being demonstrated on material from the Samapleu Prospect. The high-grade nickel and copper concentrates are clear testimonies of the quality of the mineralised material amenable for open-pit operations at the Samapleu project,” stated Dr. Marc-Antoine Audet, President & CEO of Sama Resources Inc.

Dr. Audet added, “Sama took another step in the right direction, with these excellent metallurgical results corroborating that the mineralised material at Samapleu and the recently discovered Grata prospect respond favorably to traditional flotation concentration processes.”

Following a review of the Samapleu and Grata geology, drilling databases and lithologies, representative composites for testing were designed based on the available drill core. A complete description of the design of the composites will be provided as part of the final release on this phase of testing. However, highlights of the composites are shown in Table 1 below:

The composites were subjected to mineralogical characterisation using quantitative evaluation of minerals by scanning electron microscopy (“QEMSCAN”). Modal analysis showed the main value sulphide minerals present as chalcopyrite and pentlandite. Minor amounts of iron sulphides, occurring as mostly pyrrhotite, were also present. Most of the silicate gangue was present in the form of various pyroxenes. The chalcopyrite and pentlandite were well liberated at the grind size of approximately 80 percent passing 140 microns, also applied in the 2020 PEA Study.

For any sulphide nickel deposit, a primary driver behind the recovery of nickel to the nickel flotation concentrate is the presence of nickel in sulphide form, as non-sulphide hosted nickel cannot be recovered to an economic concentrate by flotation. The Samapleu and Grata prospect compare well against many of their peer deposits in this respect, however like all such deposits, the deportment of nickel as nickel sulphide will vary.

A series of rougher and cleaner batch flotation tests were conducted focusing on sequential flotation of the copper followed by the nickel. This represented a different strategy from prior testwork, which produced a bulk concentrate followed by copper-nickel separation.

The new process employed sequential rougher flotation for copper and nickel, with each concentrate being reground and cleaned three times.

The Grata composite yielded impressive metallurgical performance after only a few tests.

Two LCT were then performed. Both tests yielded good grade copper and nickel concentrates at good recoveries, however the second (“LCT #2”) was more stable and is the data source for this release. LCT #2 consisted of eight cycles and exhibited exceptionally good stability in both copper and nickel circuits. The final results projection, for the base metals, was formed from the average of cycles six to eight and is presented in Table 2.

More details on the flowsheet will be released once the work is complete.

Work so far on the Samapleu Main Composite has been limited to batch flotation testing. However, results have been similarly encouraging, with high-grade copper and nickel flotation concentrates being pulled from the composite after only two cleaning stages. The results shown in Table 3 below will shortly be confirmed with locked cycle testing, which if successful should further boost recoveries of all metals.

Nickel recovery to the nickel concentrate was 64% at a grade of 13% nickel. Some 48% of the cobalt was also recovered to this concentrate, which, as with the Grata Concentrate, will attract good payment terms from most smelters.

Further testing is ongoing on these composites and a lower-grade composite representing the Extension Zone in Samapleu. Results from this work will be released in the future release.

Both copper and nickel concentrates produced from both composites have attractive grades for sale to smelters. In addition, both concentrates are anticipated to include payable levels of palladium and platinum, whereas the nickel concentrate is also expected to contain a payable grade of cobalt.About the Grata Nickel-Copper-PGE Prospect

The Grata mineralised zone belongs within a larger mafic-ultramafic dyke-like structure dipping steeply to the SSE and oriented ENE-WSW considered to be one of several feeder conduits to the extensive Yacouba Intrusive Complex discovered by the Company in the early 2010s. Within this overall dyke form, sulphide mineralisation within pyroxenites is concentrated on both the footwall and hanging wall margins. The thickest and the highest-grade mineralisation occurs in a zone of thickening about 850 meters long that plunges moderately to the east to depths exceeding 400 meters (Figures 1 & 5).

Mineralised materials at the Grata prospect are comparable to those at the Samapleu deposit. These zones of thickened mineralisation with high-tenor sulphides fit within a model of channelized magma flow in extensive transcrustal magma plumbing systems, such as is proposed for the majority of large magmatic sulphide deposits. 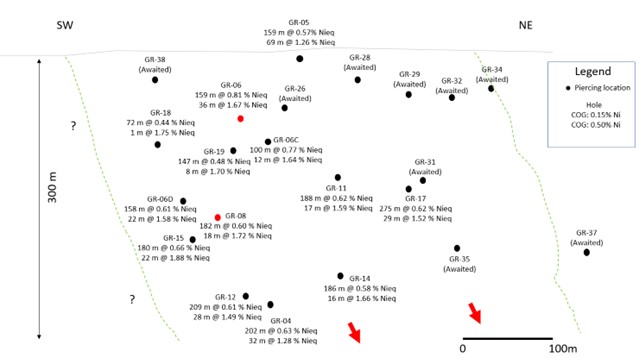 The metallurgical technical information in this release has been reviewed and approved by Chris Martin C.Eng, MIMMM, Consulting Metallurgist, while the geological technical information has been reviewed and approved by Dr. Marc-Antoine Audet, Ph.D. Geology, P.Geo and President and CEO of Sama, both acting as a ‘qualified person’, as defined by National Instrument 43-101 Standards of Disclosure for metallurgical reporting.

Sama is a Canadian-based, growth-oriented resource company focused on exploring the Samapleu nickel-copper project in Ivory Coast, West Africa. The Company is managed by experienced industry professionals with a strong track record of discovery. Sama is committed to developing and exploiting the Samapleu Nickel-Copper and Platinum Group Element Resources.

Certain of the statements made and information contained herein are “forward-looking statements” or “forward-looking information” within the meaning of Canadian securities legislation. Forward-looking statements and forward-looking information such as “will”, could”, “expect”, “estimate”, “evidence”, “potential”, “appears”, “seems”, “suggest”, are subject to a variety of risks and uncertainties which could cause actual events or results to differ from those reflected in the forward-looking statements or forward-looking information, including, without limitation, the ability of the company to convert resources in reserves, its ability to see through the next phase of development on the project, its ability to produce a pre-feasibility study or a feasibility study regarding the project, its ability to execute on its development plans in terms of metallurgy or exploration, the availability of financing for activities, risks and uncertainties relating to the interpretation of drill results and the estimation of mineral resources and reserves, the geology, grade and continuity of mineral deposits, the possibility that future exploration, development or mining results will not be consistent with the Company’s expectations, metal price fluctuations, environmental and regulatory requirements, availability of permits, escalating costs of remediation and mitigation, risk of title loss, the effects of accidents, equipment breakdowns, labour disputes or other unanticipated difficulties with or interruptions in exploration or development, the potential for delays in exploration or development activities, the inherent uncertainty of cost estimates and the potential for unexpected costs and expenses, commodity price fluctuations, currency fluctuations, expectations and beliefs of management and other risks and uncertainties.

Neither the TSX-V nor its Regulation Services Provider (as that term is defined in the policies of the TSX-V) accepts responsibility for the adequacy or accuracy of this release.