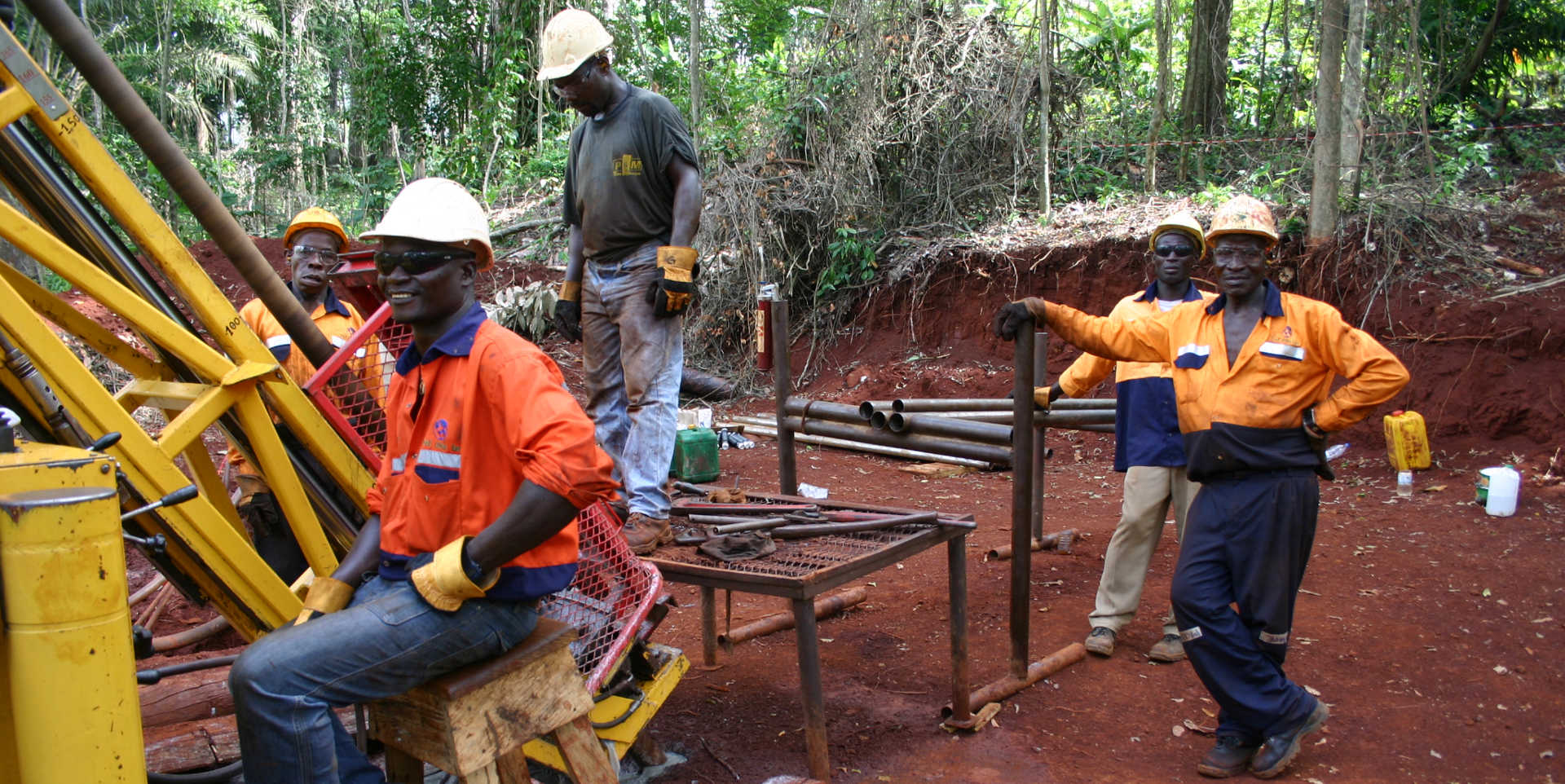 On June 2, 2020, Sama Resources Inc. announced that the Company has filed an  independent technical report (the “Report”) prepared in accordance with National Instrument 43-101 – Standards of Disclosure for Mineral Projects (“NI 43-101) supporting the results of a Preliminary Economic Assessment (“PEA”) for the development of its Samapleu Nickel-Copper project located in Ivory Coast, West Africa

On January 15, 2009 (“Effective Date”), Sama Nickel entered into a Syndicate Agreement (“SA”) with SODEMI, a parastatal organization, whereby Sama Nickel has indicated a particular interest in the exploration of an area covered by the former Permit No. 123 (“PR 123”), held by SODEMI, located in Ivory Coast. The former PR 123 encompassed approximately 446 square kilometers. 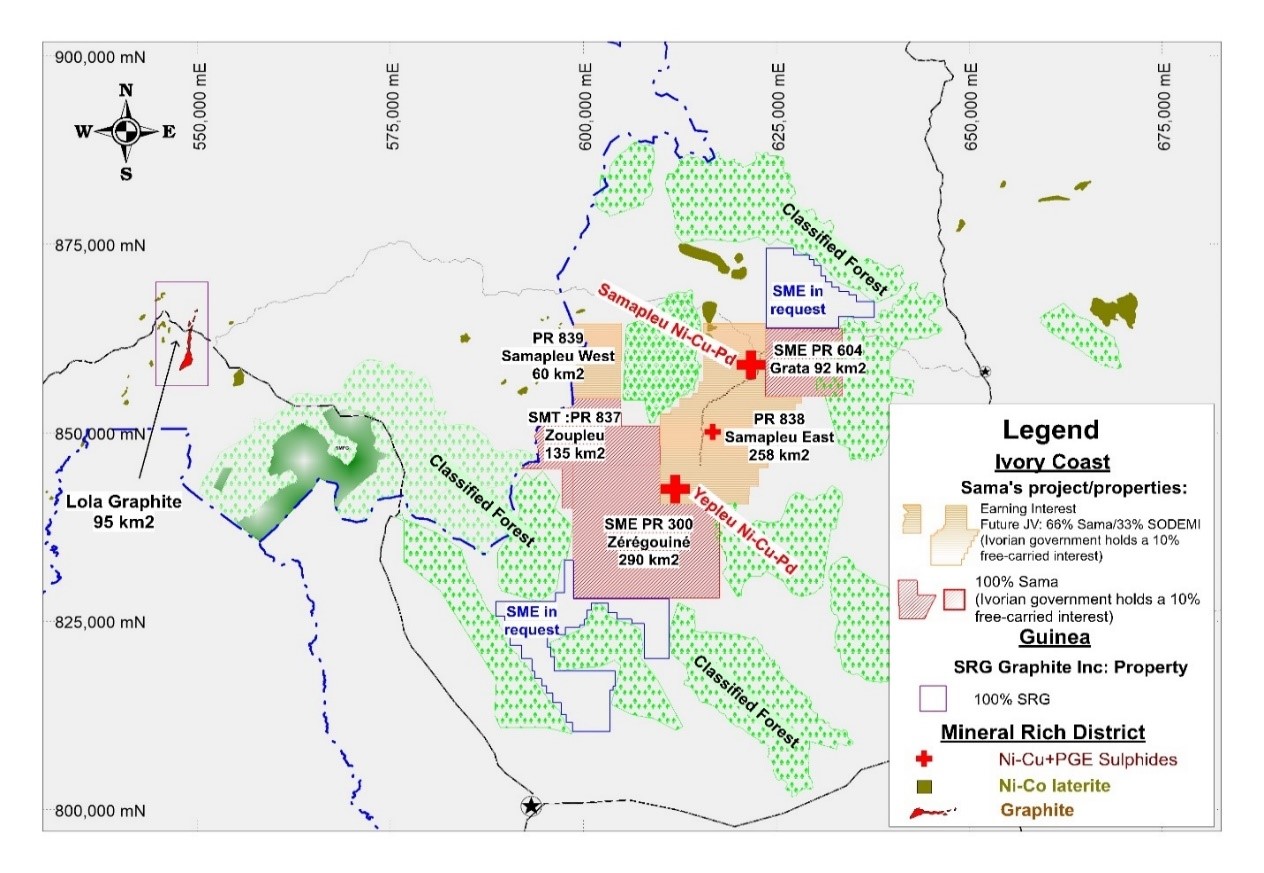 Upon execution of the SA, Sama Nickel became responsible to finance exploration work programs during the exploration phase of the project through completion of a Bankable Feasibility Study (“BFS”). SODEMI will not contribute to work conducted under the SA.

On October 25, 2015, Sama Nickel and SODEMI extended certain terms of PR 123 resulting in an exploration license extension to June 25, 2017. On June 9, 2017, before the license extension expired, Sama Nickel and SODEMI filed a request for a Mining Permit (Permis d’Exploitation «PE») for an area of 160 square kilometres within the Samapleu exploration license as well as a request for an Exploration Permit (Permis de Recherche «PR») for the remaining area of the Samapleu PR 123, located west of the PE.

In March 2018, following discussions with the government, SODEMI withdrew its application for a Mining Permit and applied for two (2) new exploration permits covering a total area of 318 square kilometers (Samapleu-East and Samapleu-West) to replace the former PR 123. According to a new regulation in Ivory Coast, classified forests must be removed from any new application. Therefore, the total surface area covered by the two (2) new exploration permits is smaller than the initial area covered by the former PR 123 (Figure 1).

Upon completion of the BFS, the Advisory Committee (“AC”), which consists of two Sama Nickel representatives and two SODEMI representatives, will conclude on the feasibility of the project. If the AC decides to proceed with the project, an Exploitation Entity (“EE”) will be established whereby future funding will be split between Sama Nickel and SODEMI at 66.7% and 33.3%, respectively. The EE will reimburse SODEMI for all costs associated with previous exploration work conducted until January 15, 2009 up to a maximum of F CFA 834,999,457 (approximately $1,858,693 as at December 31, 2019) and will reimburse Sama Nickel for costs associated with exploration work conducted between the Effective Date and the approval of the BFS subject to the approval of the AC which represents a total amount of $21,649,750 as at December 31, 2019.

On September 20, 2019, Sama Nickel and SODEMI signed an amendment to the SA under which the parties confirm the immediate and direct interest of Sama Nickel and SODEMI at 66.7% and 33.3% respectively in the two (2) new exploration permits and this notwithstanding any future request for an exploitation permit. The ownership of the future EE shall be allocated as follows: The ownership of the future JV shall be allocated as follows:

In 2016, CVMR was retained to perform a detailed technical study to confirm the commercial viability of producing nickel and iron powders from nickel-iron concentrate obtained from the flotation of the mineralized material of the Samapleu deposits.

The Company will continue with its exploration efforts aiming at delineating massive sulphide reservoirs that could be the source of high-grade nickel (“Ni”) – copper (“Cu”) – palladium (“Pd”) lenses intercepted in shallower boreholes at the Samapleu deposits.

The Table 1 highlights high-grade drill results at the Samapleu and Yepleu deposits (Figure 1). 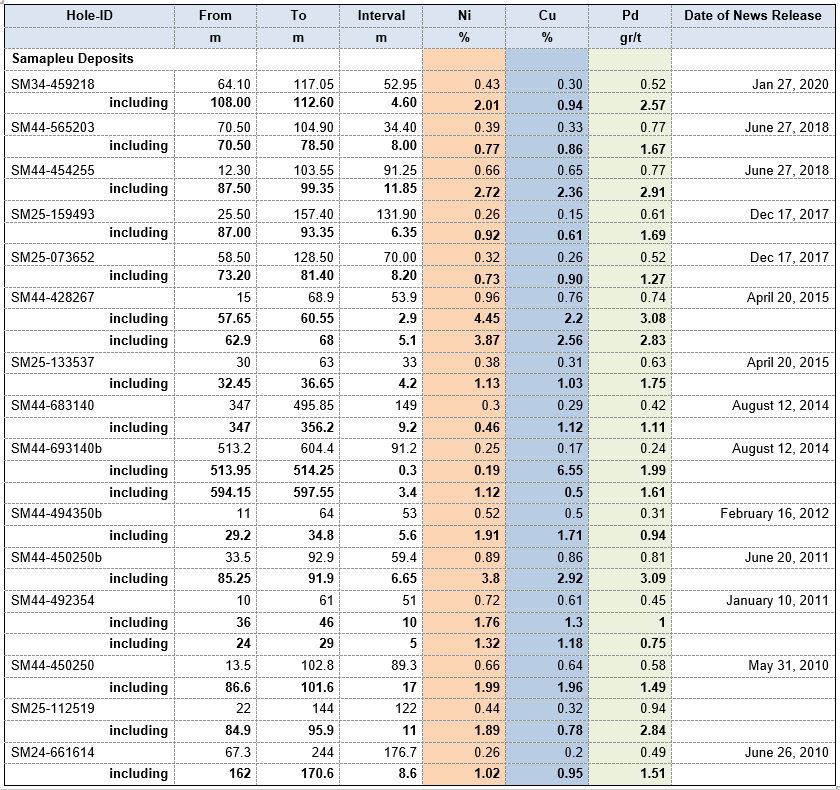 In 2013, Sama purchased its first Coreteck track mounted CSD1300G wire line drill rig. A second drill rig was purchased in 2014. Since then, all drilling activities were performed internally. Table 2 summarizes the drilling programs from July 2010 to September 2016.

Near surface exploration at the Samapleu Project (< 150 m deep) returned centrally located massive sulphide lenses and veins stock works encased in a thick halo of disseminated sulphide.  Nickel and copper tenors of up to 4-5% and 6-8%, respectively, were obtained in massive sulphide material. Eleven boreholes were drilled testing the Tri-dimensional Conductivity Depth Imaging (“CDI”) targets. All high priority CDI targets could be related to the presence of mineralization in various concentrations including semi-massive to massive lenses within what Sama believes to be the mineralized trend extending at depth and laterally.

Hole SM44-683140B intercepted a total of 91m of mineralized pyroxenite with several semi-massive to massive sulphide stringers and lenses before being terminated within the mineralization due to maximum depth capability of our drill rig. Tenors of up to 6.55% copper and an interval of 3.4 m grading 1.12% nickel, 0.50% copper and 1.61 gpt palladium were intercepted at the bottom of the hole which suggest that the mineralization continued at depth.

Several holes should be deepened using a more powerful drilling rig to fully test the bottom of the pipe-like intrusion that forms the large fold and returns very strong conductivity responses over a strike length of 1.6 km and links the Samapleu Main and the Extension 1 deposits.

Drilling results confirm the pipe-like intrusion as a 1.6 km long, large fold linking the Samapleu Main and the Extension 1 deposits and solidifies the geological model at depth.

In January and February 2018, Geotech Ltd., completed a 2,889 line-kilometre HTEM survey over the Samapleu and Yepleu areas (PR 300). The HTEM Survey was flown over the area at 200-meter line spacing, using their Versatile Time-Domain Electromagnetic geophysical system. The survey was completed in February 2018.

The Zérégouiné Property is 100% owned by Sama CI and is adjacent to the Samapleu Property.

On June 6, 2013, the Company announced the discovery of mineralized surface outcrops grading up to 1.39% nickel and 2.26% copper (tested using a handheld Niton XRF analyzer) located 18 km southwest of the Samapleu nickel-copper deposit.

The occurrence, named Yepleu, covers an area of 24 km2 in the NE corner of the Zérégouiné Exploration Permit. Outcrops with up to 25% disseminated sulphide mineralization in mafic and ultramafic rocks and strong mineralization are seen at surface along a NW-SE strike length of 1.7 km, with some of them showing continuous mineralized horizon of up to 25 m in strike length.

The sector shows a strong HTEM conductivity covering an area of 6 km by 4 km with extension to the SW over more than 17 km (Figure 2).

The disseminated mineralization is typically characterised by fine isolated grains to large granular aggregates of nickel, copper and iron sulphides. Sulphide phases observed so far include pyrrhotite, chalcopyrite, pentlandite and minor pyrite.  Pentlandite occurs as inclusions in pyrrhotite. Disseminated sulphide occurs as fine grains of 0.5 to 1 millimetre in diameter, showing a high ratio of pyrrhotite versus chalcopyrite.  Sulphide veinlets and fine filaments are also present.  Composite grains of sulphide material are dominant, forming sulphide masses of odd shapes ranging from a few millimetres up to several centimetres in any one dimension. The semi-massive mineralization lenses show between 30% to 70% sulphide minerals.

Both HTEM surveys (2013 and 2018) have covered 100% of the property surface area and have identified that the geological host of the newly discovered Yepleu nickel-copper-palladium mineralization extends to the entire length alone an axe-oriented NE-SW for more than 17 km long. Numerous surface gossans and mineralized grab samples including the 8.4%Cu (Niton XRF analyzer) are present at surface. The 2018 HTEM survey outlined several new prospective sectors parallel to those already known (Figure 2).

The Company performed a first phase of Typhoon survey in August 2018 and began the phase 2 Typhoon survey on April 1, 2019.  Several additional sectors at Yepleu will be covered with the Typhoon in months to come.

Five holes for 4,191 m were drilled by Capital Drilling an Australian based company in the first half of 2019 and have intersected new mineralization at the Yepleu Sector 1 (Figure 7). The Company is currently drilling testing geophysical targets defined using the Typhoon at Yepleu (Figures 5 & 6).

The hole YE29-556043 returned results with a combined 5.2 m of semi-massive sulfides grading 1.16% nickel, 0.62% copper, 0.24 gpt palladium and 0.21 gpt platinum (using a cut-off-grade of 0.8% nickel) within a larger interval of 37 m of disseminated sulphide mineralization grading 0.41% nickel, 0.31% copper, 0.23 gpt palladium and 0.17 gpt platinum.  A second hole drilled at the Yepleu Sector 1 (Figure 7) as follow-up on the mineralized zone intersected on the first deep hole (YE29-556043) returned a mineralized zone of 54 m of disseminated to semi-massive and massive sulfide material from 585 m to 639 m from the surface. Assays results are pending.

The Company’s discovered mineralization at 600 m at depth at the Sector 1 within the Yepleu license and within the newly discovered Yacouba Intrusive Complex (dated as the same age as the Bushveld Complex in RSA (2.1 Ga) which host the large nickel-palladium Platreef deposit) is another evidence that the Yacouba intrusion system has the potential to host a significant amount of high-grade nickel-copper-cobalt and palladium in reservoirs and pods that are yet to be discovered. Sama’s have outlined a strike length for the Yacouba Intrusive Complex of more than 66 km. The Yepleu area appears to be the center of the intrusion from where it seems to have “radiated” in all directions. This observation suggests that the Yepleu area is as proximal as we can get to the hot spot. 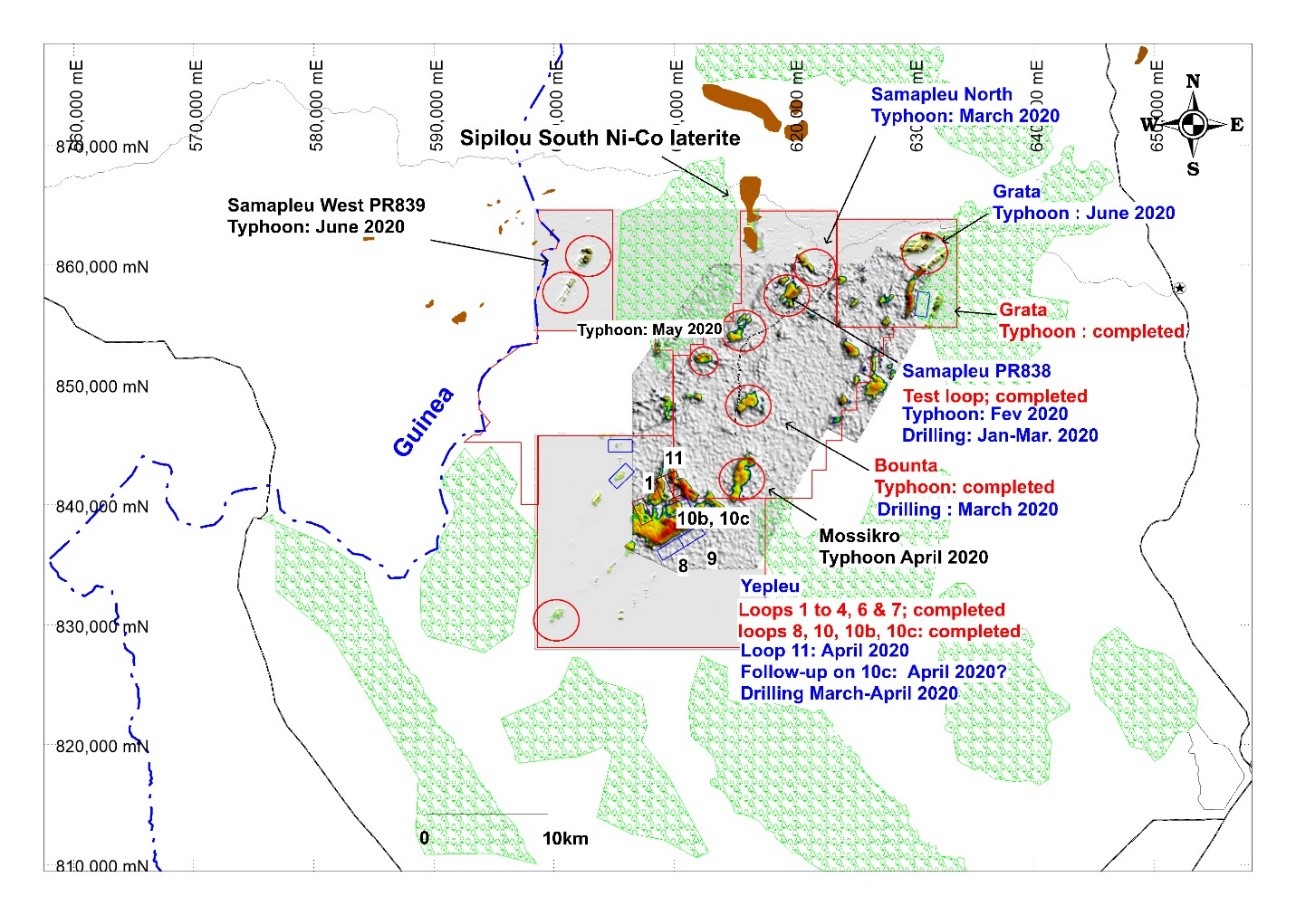 Figure 2: Samapleu, Zérégouiné, Zoupleu and Grata Exploration Permits showing the combined HTEM 2013 and 2018 conductive potential zones together with the exploration program for 2020. 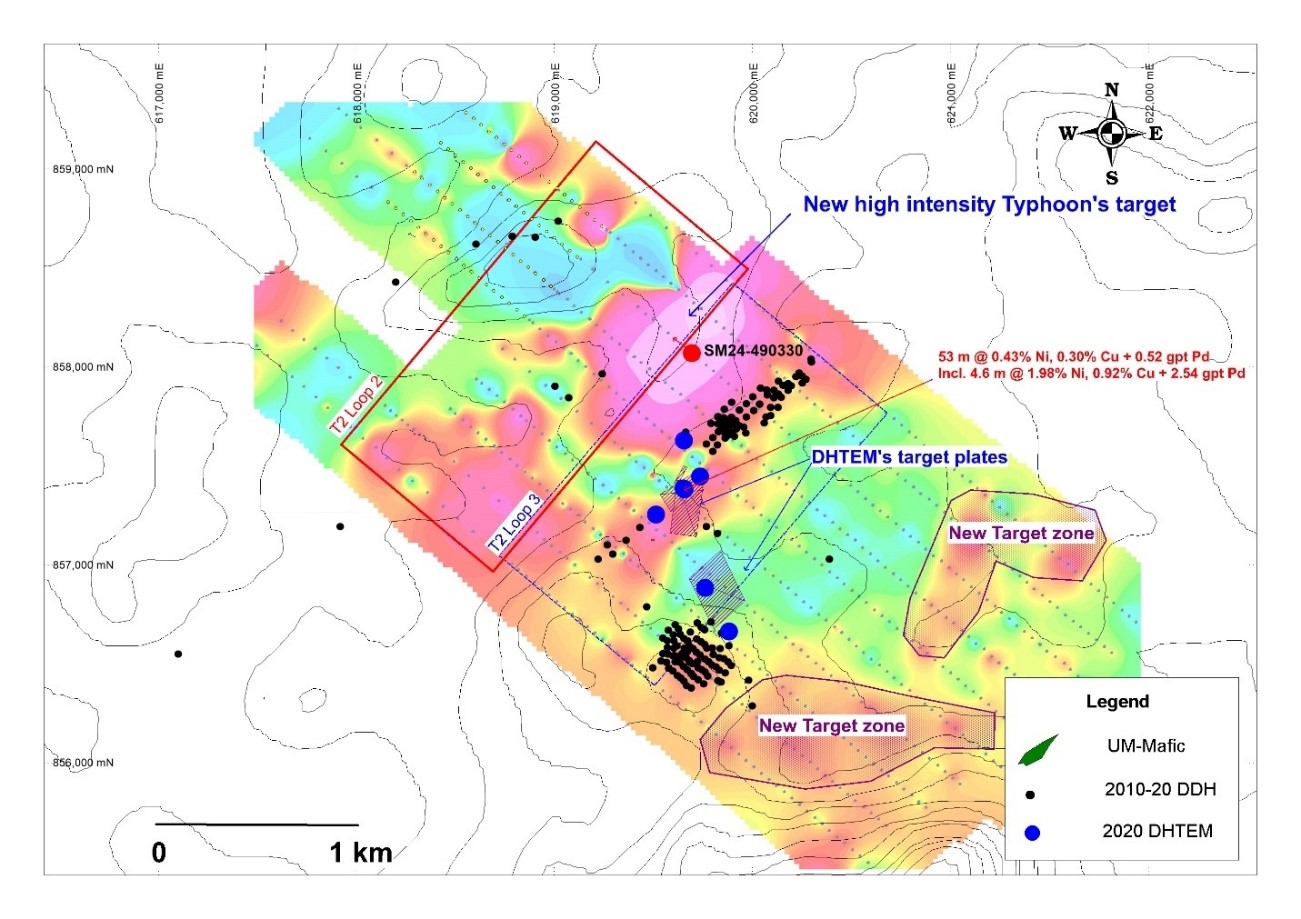 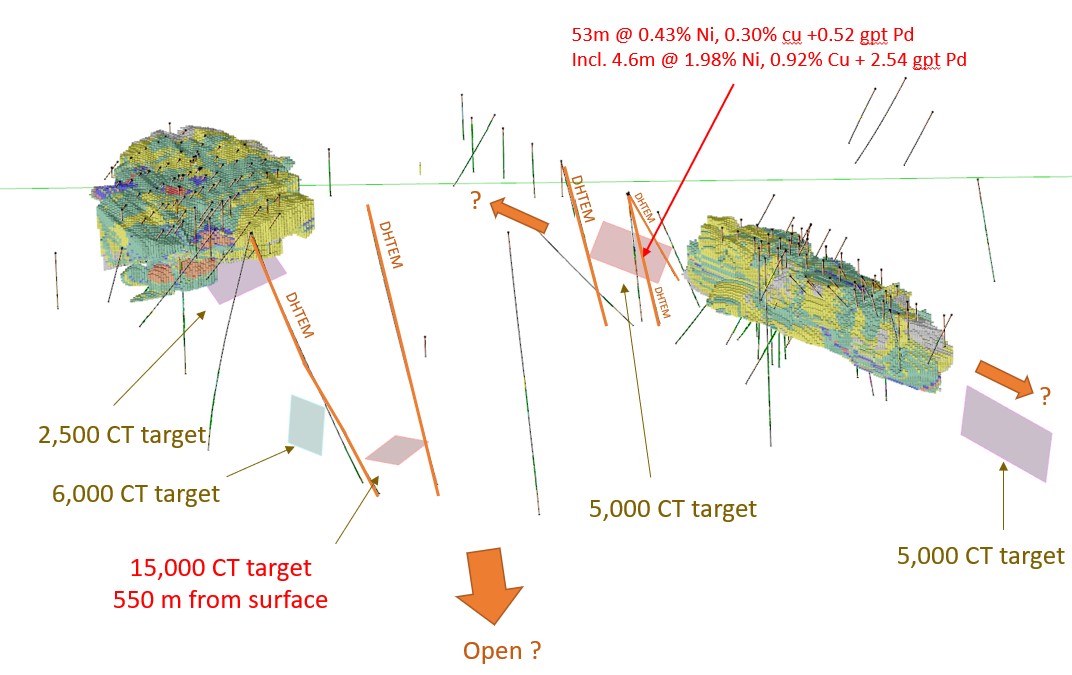 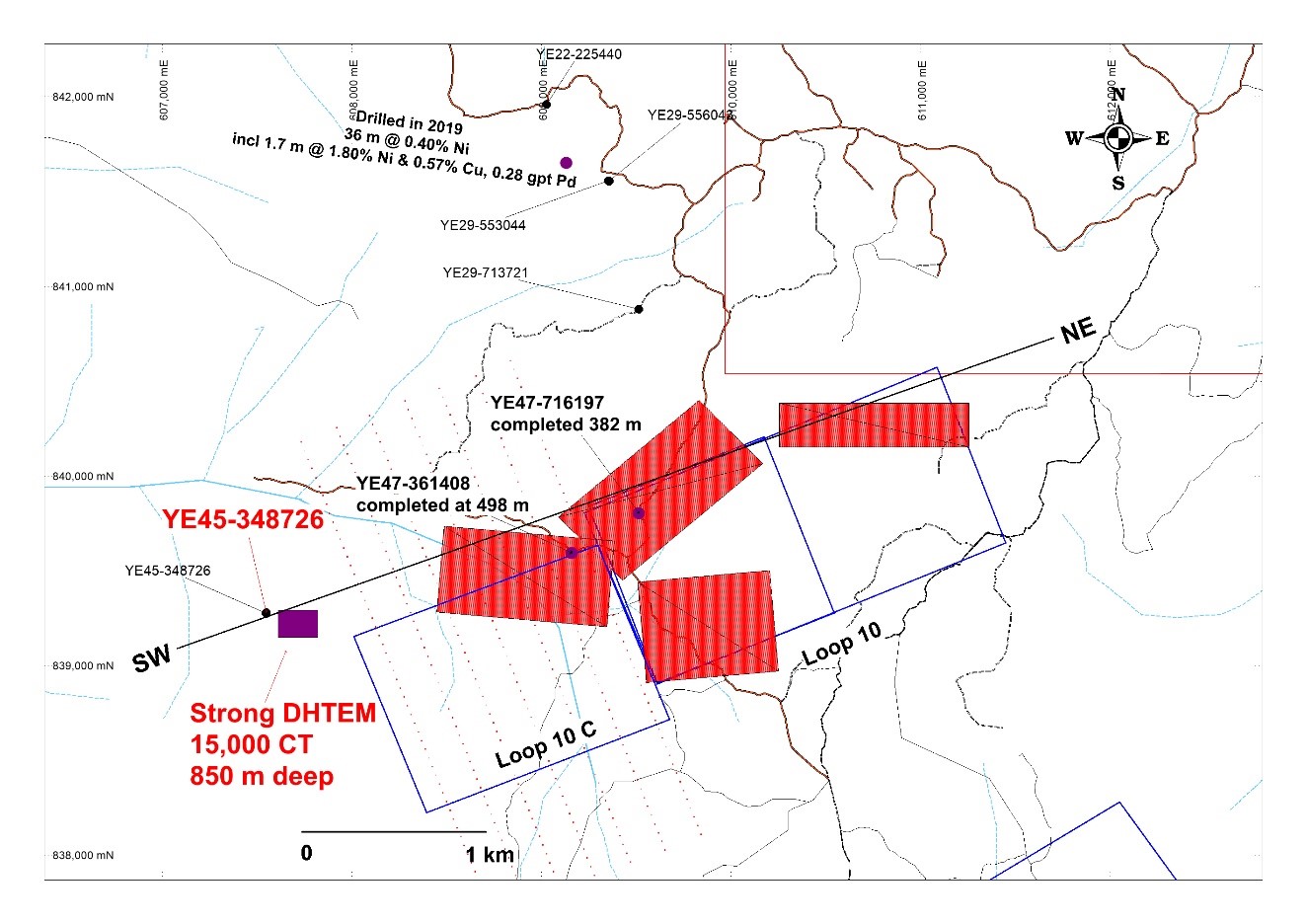 Figure 5: Surface map at the Yepleu prospect showing Typhoon EM results for the area surrounding the loops 10 series with the two latest boreholes drilled at the property (YE47-716197 & YE47-341408) to test targets (red) at depth. 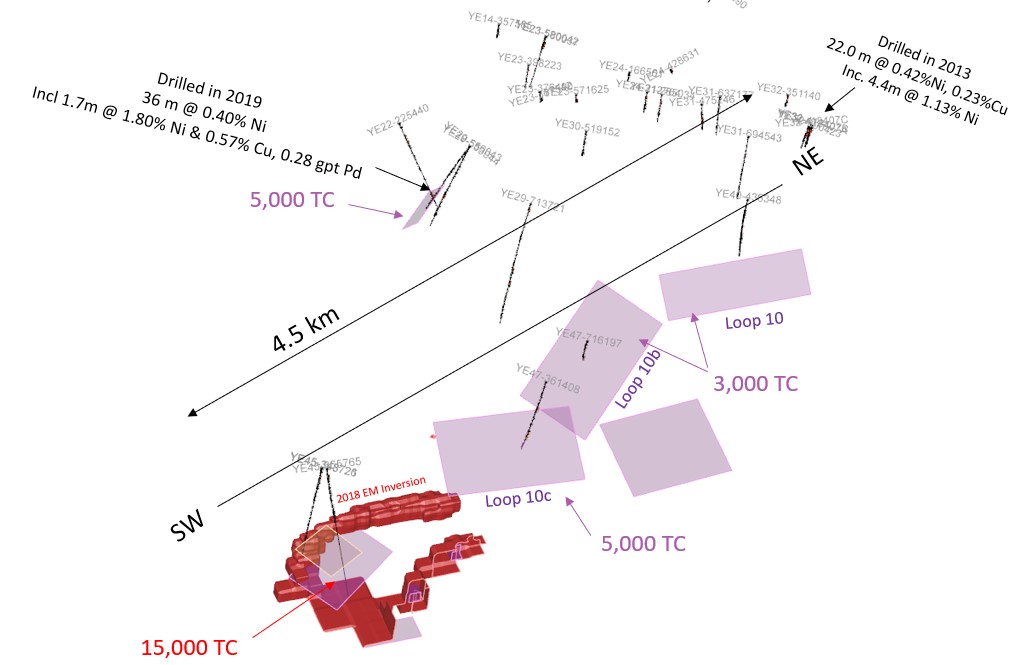 Figure 6: 3D presentation map and a cross section SW-NE showing the EM targets (plates) generated from the loop series 10. Results to date clearly shows a mineralized trend toward the SW going at depth. The down hole EM survey performed in 2019 down the borehole YE45 348721 returned a very strong target of 15,000 Conductivity-Thickness (CT) units located 850 m from surface and 75 m to 100m north from the borehole. 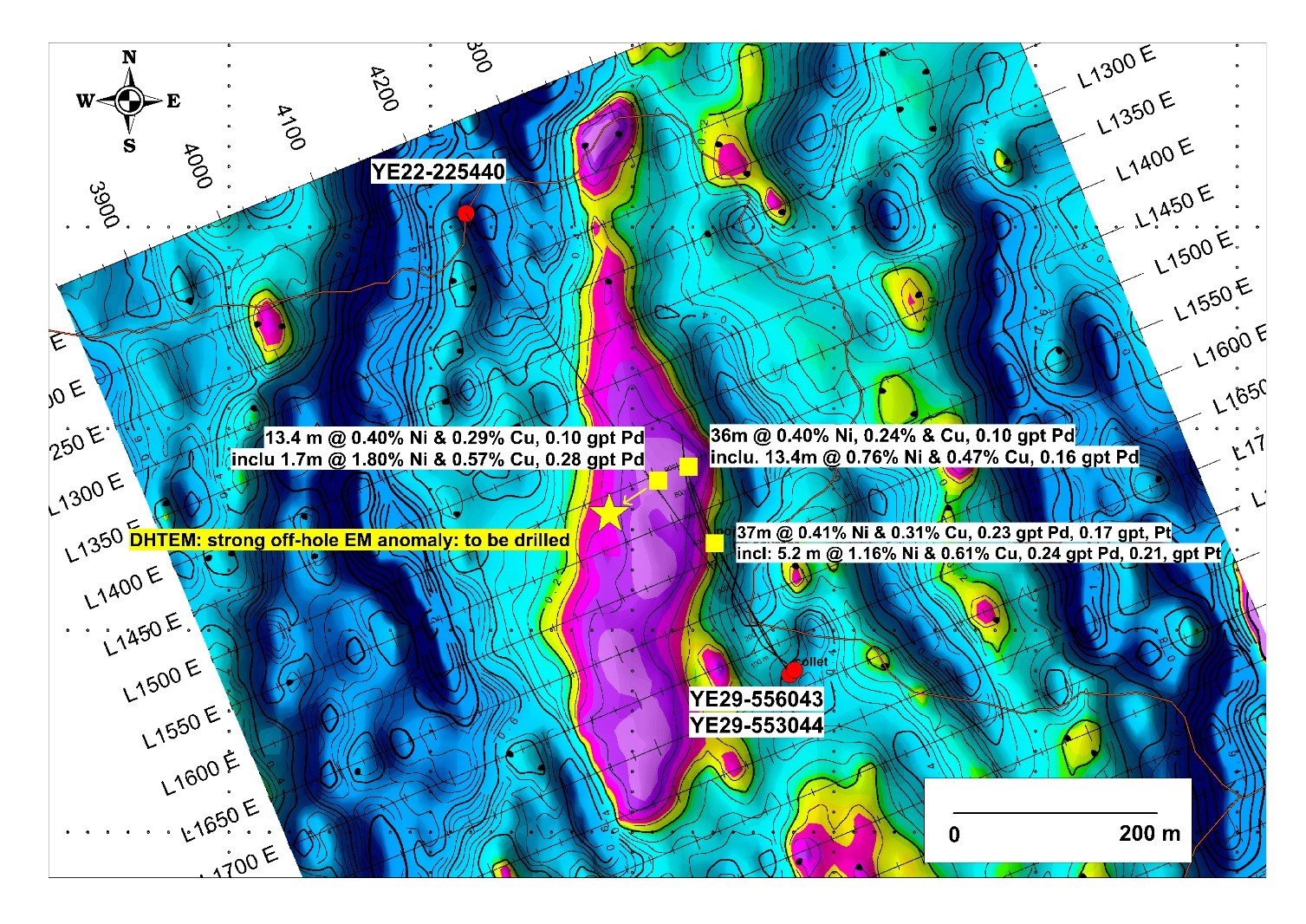 Figure 7: Surface map at Yepleu Sector 1, showing the target zone as defined by Mise a la Masse and Borehole TDEM together with the recent borehole’s intersects.